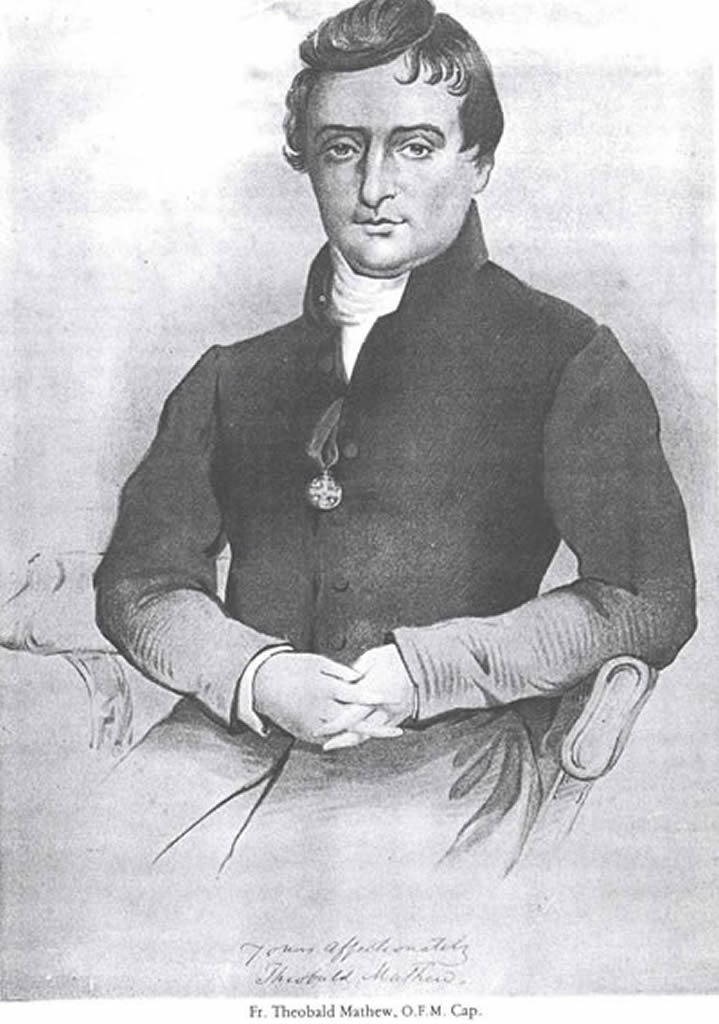 In the 17th century the Mathew family came to Ireland from Wales. George Mathew settled in Thurles, Co. Tipperary, married Elizabeth Poyntz, widow of Thomas Butler, Viscount Thurles. Their son George built Thomastown Castle where Theobald Mathew was born on 10th October 1790. His parents were James Mathew and Anne White, whose family gave its name to the village of Cappawhite, Co. Tipperary.Theobald was a cousin of Nano Nagle the foundress of the Presentation Sisters. He spent the first five years of his life at Thomastown Castle then moved, with the family, to Rathcloheen House, Golden. He was to return, frequently, to the Castle which had an importance influence on his future life.

His genuine concern for the poor and distressed manifested itself from an early age. He possessed a humane, charitable and pious disposition, caring for the sick, the lame and the blind. This concern was to pervade his future life as a Capuchin.

He was educated at a private school in Thurles where he had as one of his companions, Charles Bianconi, the future stagecoach operator. He received further education from a local priest, Fr. Denis O’Donnell and was sent to St. Canice’s Academy, Kilkenny at the age of ten. He entered St. Patrick’s College, Maynooth in September 1807 but did not remain long. He requested to join the Capuchin Order and was received into the Order as a novice in 1810. He was ordained in Dublin on Holy Saturday, 17th April, 1813.

His first assignment as a Capuchin was to Kilkenny. Within a year he transferred to Cork where he remained for the rest of his life.
From a small friary at Blackamoor Lane he captured the affections of the poor and the confidence of the rich. His treatment of the penitents in the confessional drew attention to him as being remarkably sympathetic. Because of the crowds he adopted a practice of hearing confessions on a daily basis, often as early as 5.00 am or as late as 8.00 pm.

His reputation as a preacher drew many to hear him. His sincerity rather than his oratory having a profound effect of the congregation.

Care for the poor and underprivileged was always his chief concern and in 1819 he founded the Jesephian Society, the precursor of the present day Society of St. Vincent de Paul.

Drunkenness was not a widespread vice of the Irish people until the early part of the eighteenth century. William Martin, a Quaker founded the Cork Total Abstinence Society in 1835. It made little headway and Martin realised that without an influential priest the movement would fail. Martin sought out Fr Theobald Mathew, the best known and most influential priest in the City. Fr Mathew had often denounced the evils of excessive drinking in his sermons and entrusted himself whole heartedly to the temperance cause. He discovered that if the cause were removed the effects would cease, with the words “Here goes in the name of God” he signed the Cork Total Abstinence Society on 10th April 1838, and his campaign began.

He was convinced that total abstinence was the only cure for drunkenness. He became President of the Cork Total Abstinence Society and after just ten months over 6000 had taken the pledge. By the end of 1839 it was estimated that approximately 60,000 had pledged.

On invitation from Bishop John Ryan, Fr Mathew visited Limerick to preach on a charity sermon. He spent three days administering the pledge to over 6000 people. After this episode he was sure he had discovered his calling. Over the next few years Fr. Mathew travelled the country on his crusade of Temperance. He made it a habit of not going to a place unless he was invited. His success in Ireland was so remarkable he was invited to visit other countries. In 1842 he visited Scotland followed by an extensive visit to England where by his own estimate enrolled over 200,000 people. In 1849 he made his long awaited visit to the USA where he visited all the States. He was entertained at the white House by President Zachary Taylor however illness forced him to curtail his work and return to Ireland.